One hundred days in to this little thing called motherhood. Some days, I feel like I just brought Braylon home from the hospital and other days, it’s as if having him here is all I’ve ever known.

Somewhat like my 50 Shades of Bay(baby) post, here are 100 thoughts, realizations…whatever you want to call them, that I’ve had over the past 100 days in no particular order…

I knew my life would change, but I don’t think anything could prepare me for how I would become a new version of myself.

For the most part, I enjoyed being pregnant. I was pretty nauseous and really really tired the whole first trimester, but comparatively speaking I think I was pretty lucky. Sometimes I really miss certain parts of it.

…mainly having two hands available to do all of the things.

Being really really tired found a whole new meaning in the “fourth trimester”.

Sometimes I have to stop to remind myself where this little human came from. It’s truly mind blowing and such a precious miracle.

How can days seem so long, yet I’m constantly wondering how the heck it’s already 8pm?

I’m a prisoner in my home.

Oh, dear, please do not make me leave this house.

Wait, when is the last time I left the house?

When is the last time I showered?

When is the last time Braylon had a bath?

Do you seriously want to eat again?

Did I not just change your diaper?

What day is it? 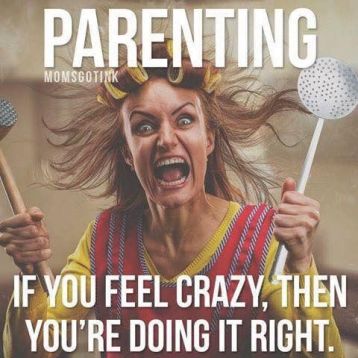 Do I talk to a baby more than any adult human being?

Allow at least an hour more than you think you’ll need.

… and you’ll still probably be late.

I’m feeling great about myself…. tries on real clothes that are not athleisure… just kidding.

If there was a way to be a parent first than a kid what a magical place the world would be.  Yeah, so basically Benjamin Button.

I’m turning into my Mother and now as a Mother, I can only hope that I literally can turn into the superhero that she is.

Sleep when the baby sleeps… oh, just shut up.

The Internet is a wonderful thing.

The Internet is a terrible thing.

For the first month and a half to two months I found myself reading so many different things online — daily emails, googling any and everything, going down a rabbit hole on message boards from the past decade… and it made me start to feel a little cray cray to say the least.  I’ve definitely gotten a lot better at that and stopped obsessing (as much).

I’ve never been good at asking for help.  Asking for help with Braylon has been no exception.  Hoping I can improve on this really soon.  Like three months ago soon.

Sometimes my mind starts to wander to the future and I try to bring myself back to the present.  There’s no sense in ruining the next 24 hours by stressing about the next 24 years. I’m really trying to actively be present in the moment with Braylon.

If it weren’t for my Mom, I would have most definitely lost my mind.

Do you seriously want to eat again?

Until you are in it (motherhood) there’s truly nothing that can fully prepare you for it.  No situation or person is exactly alike — different things work for different people no matter what anyone says (well, within reason people, c’mon)

I’ll do it tomorrow.

Priorities shift BIG time. There’s definitely days that I miss certain aspects of the old version of me, but then I look at Braylon and that doesn’t matter (or at least matters a whole lot less)

Laughing in his sleep. Priceless.

Seeing himself in the mirror. Even better.

At this point, I’m pretty sure I can stand in for any person on Martin, Fresh Prince of Bel Air or The Office.

Caffeine and I became friends again. I tried to stay away, I really tried, but working more than forty hours a week and taking care of Braylon in the midst of everything else going on… it just wasn’t happening, honey.

I had hopes and dreams of blogging more once I was a Mom…. still waiting for that to magically happen… soon.

The dishes can get done tomorrow.

Any time someone wanted to give me a “pass” since I was a new Mom…you better believe I took it.  I’ll keep taking them for as long as someone wants to give them to me actually. *18 years later*

“Being a Mom” counts as a workout, right?

Just like early on during my pregnancy, I planned to track EVERYTHING that happened with Braylon.  I quickly found that I would rely on photos, videos and various text / Facebook messages to piece it altogether. Guess it’s never too late to start and create a better log!

My Mom has always talked to herself (out loud) for as long as I can remember.  I’m convinced this originated with talking to me as baby and it just never went away… because even once Braylon can talk or is off doing his own thing, I don’t think I will be able to stop.

Stealing this one from my 50 Shades of Bay post. “These pants didn’t fit last week, so let’s try them again this week, surely this will fit. Give it up, girl.”

Oh, and this one…”Sometimes it doesn’t matter what your friend, coworker, relative, stranger, ANY other person felt, didn’t feel, did, didn’t…during their pregnancy. Sometimes, you just gotta focus on Y.O.U…. Or maybe all the time?” Just replace pregnancy with… LIFE.

Alright, I’m on a roll now… “There are some people that just know exactly what to say sometimes. Cherish those words. More importantly, cherish those people.”

I remember having really bizarre dreams throughout my pregnancy.  Now, I RARELY recall any dreams.  Is that because I don’t get into the deep sleep cycle EVER?! Did this happen to anyone else?

Stealing another one.  “Almost there.  Yes, with this post but I’ve found this being a common theme over the past months.  Planning is great and all, but there are certain things in life, like pregnancy, that you just have to kind of go with it.  Take it as it comes.  One day at a time.  I tried (key word tried) to stop obsessing about things as much as possible.  Focusing on what needs to be done in the next few hours…next few days… and so on.  I’m quite the planner when it comes to work and my personal life, but have tried to channel even more of the need for planning into my work and take a little bit out of my personal life.  It’s a work in progress.”  I need to take my own advice.

How can a baby grow from milk and milk alone?  It blows my mind.

“There’s no way to be a perfect mother and a million ways to be a good one.” – Jill Churchill

If you thought the 50 Shades of Bay post was all over the place, there’s a strong possibility that IF you’ve made it to this point, you’re just going to throw in the towel.

Is it possible to kiss your child too much?  Asking for a friend.

The 24 hours before Braylon’s arrival and first few days after seem like they took place on another planet or during a different lifetime or were just a figment of my imagination.

I most definitely can not do it all.

I’m convinced this car seat weighs 50 more pounds than it actually does.

“In giving birth to our babies, we may find that we give birth to new possibilities within ourselves.” – Myla and Jon Kabat-Zinn

I won’t write about the wide range (extreme opposite ends of the spectrum) of thoughts that I had about my marvelous significant other.

The dishes are still not done.

He’s been sleeping so well.

Make that spoke too soon about everything. 😉

How is it already 8pm?

Ok, what year is it?

This is the worst day ever.

Just kidding, this is the best day ever.

Is it possible to say anything without providing the person with some type of justification / logic behind it?

It shouldn’t take me too long to do this… *narrator* It took her much more time than she thought it would to do this.

How’s old the baby? …. I don’t even know. The other day I accidentally said three and a half weeks.

Can someone please give me an IV? It is not possible to consume as much water as I need.

How do people have more than one child?!

Oh my gosh, I’ve got this, let’s have another!

“You never understand life until it grows inside of you.” – Sandra C. Kassis

Some days I think I have more conversations with myself (in my head and out loud) and with Braylon than I do with adults.

Also, half the time I can’t differentiate from the conversations in my head with the ones that I’ve had with people…Did we actually talk about this or did I just imagine we spoke about this?

It’s hard to think back to what life was like before becoming a Mom even though it wasn’t long ago at all. One thing is for sure — I wouldn’t trade it for anything.

If you’re still here, I owe you a drink or a donut or something.

“The moment a child is born, the mother is also born. She never existed before. The woman existed, but the mother, never. A mother is something absolutely new.” – Bhagwan Shree Rajneesh

Last, but not least, watch What Do New Moms Do All Day

It took so much longer than I anticipated to get to 100. Guess that’s quite appropriate for what this post is about. Hope you have a marvelous Sunday and maybe this even prompted a nap!