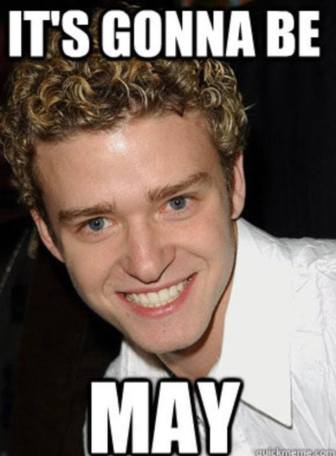 This still hasn’t gotten old to me.

Well, it’s looking like the warm weather is here to stay in the Carolinas…and it won’t be long before things get hot. Like really really hot.

Two weekends ago we went down to Atlanta for Game #1 in the Playoffs against the Boston Celtics. Hotlanta is about two hours (sometimes a little more depending on 85) away, so it’s not too bad of a drive. Since I don’t have a lot of red clothing (that aren’t workout pants) and knew Randall wouldn’t appreciate me wearing a Celtics jersey, I borrowed a pair of pants from my Mom. Just kidding…

I know she actually had a really similar pair of pants when I was kid.

It was like a yellow highlighter exploded throughout the entire arena.

After the game, I managed to run into a friend/former coworker, Danielle, at one of the bars we ended up at.  Danielle and I worked together at Red Bull.  I had gone down to New Orleans when she first came on board full time to work with her for a few days.

Better yet, we were on the Red Bull dance team together in Austria (when the U.S. won for the second year in a row).  That is definitely still one of my favorite memories that I had during my eight years at Red Bull.

I must’ve known that I was going to run into a dance pal…I mean I was even wearing a leotard. 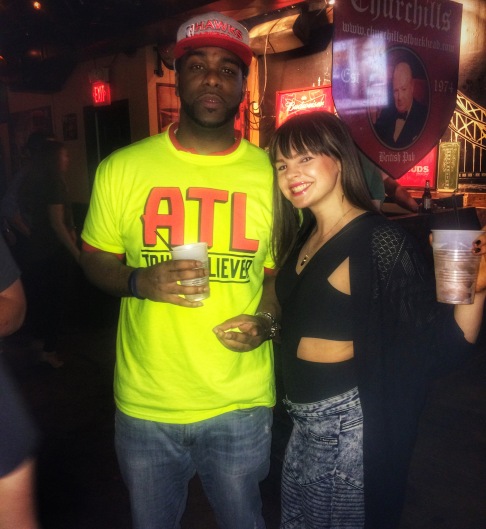 At least I couldn’t lose him in the bar.

The Hub City Co-Op opened right around the corner from the Pure Barre Corporate Office. Being a small town there aren’t a ton of options within walking distance, so I’m absolutely loving it. Hub City Co-op is a full-service retail grocery store, owned by thousands of community members. They feature a wide variety of local, natural and organic foods and products. So far, I’ve had items from their hot food bar, deli, get my Kevita fix in and of course had the chance to try out some sweets.

I spotted the Hail Merry Merry Bites and knew I had to give them a try.  I couldn’t decide which kind to get so I went with the Chocolate Chip and Caramel Sea Salt and shared them with my coworkers.  The Chocolate Chip was my favorite.  As much as I love sweets, I can be very picky about them, especially if they are a “healthier” option.  With the Chocolate Chip Merry Bites I 100% felt like I satisfied my sweet tooth.  I spent some time on their website reading all about their company, checking out recipes and seeing what other products they had. I had been told to try their tarts so that was up next.

I got this at the Earth Fare on Pelham Road in Greenville, South Carolina.  It was good, but I definitely enjoyed the Merry Bites more.

Speaking of sweets, this bad boy popped up on my instagram the other day and I’ve had it saved on my phone for days…

Ugh, I need that…but need this… 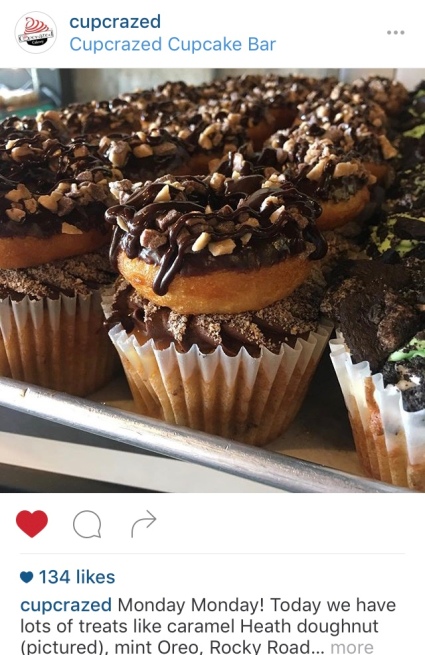 But seriously, Cupcrazed has my favorite cupcakes and then you’re going to add a donut to it? AND, I am obsessed with Heath. Thankfully, I don’t live close enough to go there often.

On Thursday night, I taught a class at Pure Barre to help raise money for LLS.  Brittany, who I work with at the Corporate office, has a friend who is running for LLS’s Man of The Year.  You can read more about Patrick Noble and all of the great events he’s been a part of to raise money for the organization by heading here.

Before class I went over to Earth Fare to grab a Kevita (still obsessed) and saw a new item in that area and had to pick ’em up.

They were both good, but I’m partial to the Lemon Cayenne Cleanse.  The Lemon Cayenne Kevita is also my favorite, so that was no surprise.  The Strawberry Lemon was made up of water, lemons, local raw honey and strawberries.  Lemon Cayenne was the same…except the strawberries were substituted with organic cayenne.

Saturday morning we headed to Charlotte to meet some of our friends at the Queen’s Cup Steeplechase.  We had gone to the event last year and it rained most of the day.  Despite the rain we still had a great time.  There was no rain in sight so I was really excited about this year’s cup.  It did end up raining a little bit towards the end of the day, but overall the weather was perfect.  Well, maybe a little warm, but hey, I’m not complaining.

I don’t always like shopping, especially when I’m on the hunt for something very particular.  I get frustrated really quickly and the *amazing* lighting in dressing rooms doesn’t usually contribute to my mood either.

Someone was looking out for me because I found a dress that I really really liked that was “appropriate” for the attire.  Better yet, I found out I’m actually kind of obsessed with big hats.  The dress was from Macy’s and the hat was from Sears. Now, I just can’t wait until I can find a time to where this hat again (and the dress too).  Maybe I will just wear it to work on Monday.

What are your favorite events to go to? Have you been to Queen’s Cup or a similar event?